When it comes to preparing for a Bank PO, SSC, Railway, UPSC, Police, Defence exam such as IBPS PO or SBI PO, Static Awareness is one area which just can’t be neglected. Candidates preparing for any competitive exam like bank exam, SSC exam, Insurance exam, Government exam or the most prestigious UPSC exams must keep abreast with major topics of static Awareness.

Learning static Awareness helps to increase the overall score in the examination as the questions asked are factual and direct. It helps to save time while preparing for the exams and candidates can utilize that time for the preparation of tricky sections.

A significant portion of exams for high posts is dedicated to current affairs and static Awareness questions only, not just that, keeping up to date with static Awareness also helps candidates sail smoothly in their interview rounds.

Bearing all this in mind, we have collated the list of some essential Static Awareness topics that you cannot afford to miss while preparing for any competitive examinations.

Must-Read Topics Of Static Awareness For Exams
The list of topics for static Awareness given below is also available in the form of PDF. Candidates preparing for any exams can make use of it.

Census of India 2011: The 15th Census of India and the 7th Census of Independent India-2011 was started on 1st April 2010 with the President being the first citizen to be enumerated, followed by the Vice President of India. The slogan of census 2011 was ‘Our Census, Our future’. C. Chandramouli was the Census Commissioner of India in 2011.

List of All Governors-General of India: The first Governor of Bengal and first Governor-General Of India was Warren Hastings with tenure of office from 1772-1785.

List of Mughal Emperors: Babur founded the Mughal empire after his victory in the Battle of Panipat in 1526. Read to know more about all the rulers of the Mughal era in this article and know interesting facts about them.

Presidents of India: Dr Rajendra Prasad was elected as the first constitutional head of the state, the President of India. Since 1950, India has had 14 full-time Presidents and there have been tenures when the country was headed by an acting president.

List of Vice-Presidents of India: The Vice-President of India is the 2nd most important authoritative body after the President. As per the article 65, he is entitled to take important decisions in certain cases of contingency due to resignation, removal, death, impeachment or the inability of the president to discharge their functions.

Prominent Gardens in India: You will get detailed information on the famous gardens of India, their prominence and their location.

Important Summits & Conferences in India: India hosts and participates in the gamut of summits and conferences keeping in mind international trade and commerce and to boost the Indian economy.

Stadiums in India: India is home to the second-largest football stadium in the world, i.e. Salt Lake Stadium in Kolkata. To boost the other Olympic sports some of the multi-purpose stadiums have been constructed in India.

Banking Acts & Reforms: As a part of the growing trend towards globalization and economic liberalization, various banking reforms and acts have been introduced in India to upgrade the health and financial soundness of banks and to improve the operation efficiency, so that Indian banks can meet globally accepted performance standards.

Space Centre and Space Agency in India: Space Centers work to achieve space missions. Many Space Research Centers and Units are launched in India from time to time located in various cities.

Important Banking Terms: Candidates appearing for the RBI exam, SBI exam, IBPS exam, and other Bank exams will have to tackle questions from this topic.

Dams in India: A dam is a barrier that stops the flow of water and results in the creation of a reservoir. Dams are mainly built in order to produce electricity by using water. This form of electricity is known as hydroelectricity.

Government Schemes: With the purpose of addressing the social and economic welfare of the citizens of this nation, various Government schemes are launched in India. These schemes play a crucial role in solving many socio-economic problems that beset Indian society and thus their awareness is a must for any concerned citizen.

International Headquarters: International organizations have been formed with the aim of helping to set the international agenda, strengthen political relationships, providing a place for developmental initiatives, etc.

Important Boundary Lines of the World: International boundaries are the geographical borders of political or legal jurisdiction such as countries, customs territories and sovereign states. The process of the creation of a border is called boundary delimitation.

List of States and Their Dance Forms: India is known for its rich cultural heritage. Indian dance is one of the most revered identities of our culture. In India, dance forms can be broadly classified into 2 categories- classical and folk dance form.

National Parks & Wildlife Sanctuaries In India: National Parks in India act as an apt place for preserving animals by providing natural habitat and prey. The boundaries of National Parks are well defined and no private activities are allowed inside the National Park.

Riverside Cities in India: The major cities around the world are situated near the banks of the river. Most of the civilization has taken place near the river only. Cities built near water bodies have many advantages.

Biosphere Reserves in India 2020 Updated List: The biosphere reserve network was launched in 1976, two years after the initiation of MAB- Man and the biosphere program. The areas of terrestrial and coastal or marine ecosystems or its amalgamation are known as biosphere reserves.

Historical Monuments in India: Monuments are the representation of India’s tradition and diverse cultural splendour. These monuments in India are the true guarding pillars of outstanding artistic talent. These pieces of marvel are an inspiration for the future generations of India.

Important Rivers in India: Most of the rivers discharge their waters into the Bay of Bengal. Some of the rivers flow through the western part of the country and towards the east of the state of Himachal Pradesh merging into the Arabian Sea.

List of Indian Missiles: The Integrated Guided Missile Development Program (IGMDP) was launched in 1983. This program was launched with an agenda to develop five missile systems in the country – Trishul, Akash, Nag, Prithvi, and Agni-I.

List of State Wise Lakes in India: Wular lake is one of the biggest freshwater lakes in Asia and it was formed as a result of tectonic activity. Upper lake in Madhya Pradesh is the largest artificial lake in Asia. Know more such facts related to lakes in India.

Major Sea Ports of India: All ports in India are situated in the 9 coastal states of India namely Kerala, Karnataka, Maharashtra, Goa, Gujarat, West Bengal, Odisha, Andhra Pradesh and Tamil Nadu. There are thirteen major ports in the country that handle a lot of volume of container and cargo traffic.

Nicknames of Famous Personalities: The famous personalities in India are addressed with certain names by the people out of love or due to the achievement they have earned while doing something noteworthy for the country’s development. For instance, Mahatma Gandhi is known by the nickname “Bapu” and also revered as the father of the Nation.

List of Nobel Prize Winners from India: Abhijit Banerjee, an Indian born American Economist made it to the List of Indian Nobel Laureates on 15th October 2019 for his outstanding contribution to the field of Economic Sciences. Nobel prize is a set of international awards presented to people for outstanding contributions in the field of cultural, academic and scientific advances.

List of UPSC Chairman: Ross Barker was the first UPSC Chairman, and he joined the services in October 1926. There have been 29 UPSC Chairman to date, and Arvind Saxena is the acting Chairman of UPSC.

List of First in India: The first Wax statue of a Living Indian is of Mahatma Gandhi at Madame Tussaud’s and the first Indian Commander-in-Chief of India is General Cariappa. India has bagged many numero uno positions in various fields – art, culture, architecture, sports, etc.

List of Exercises by the Indian Army: Integration of the military exercises is an unavoidable obligation for the contemporary combat zone. The joint military is essential for the cooperation of countries apart from economic cooperation and the prevailing hard situation.

List of Elephant Reserves in India: The Ministry of Environment and forests in partnership with Wildlife Trust of India has launched a campaign Hathi Mere Sathi. The campaign aimed to increase public awareness and develop friendships between elephants and the local population.

List of Neighbouring Countries of India: India is located in the southern part of Asia and has a land border of 15,106.7 km and coastline of 7,516.6 km. A total of 9 countries share borders with India, 2 through the coast and seven share land borders.

State-wise List of Governors of India: The Governor is the chief executive head of that particular state and acts as a Central Government representative. Each state has a Governor, and each Union Territory has a Lieutenant Governor. Their role, responsibilities and powers are the same.

Important Inventions & Discoveries: Over the years, various Inventions and Discoveries are made in multiple fields. The inventions bring in changes in the lifestyle and make life easy. It plays an integral part in the development across the globe.

Candidates preparing for various competitive exams should go through the list of important topics for the Static Awareness section.

The following contents help you to gain basic Static knowledge 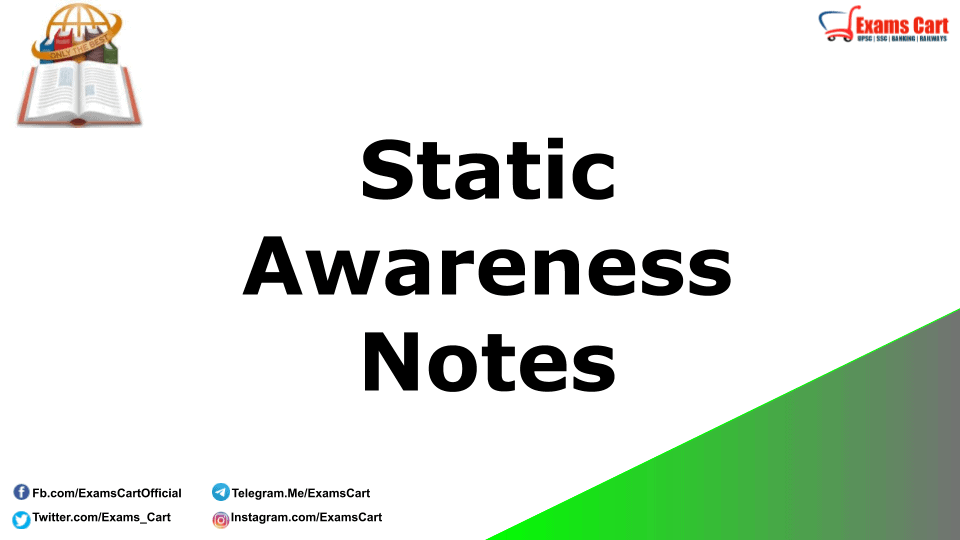 Support us by sharing these pdf among your friends so that they will also get benefit from these Notes. You can also check more best English short trick & preparation book for banking exam from ExamsCart. If you have any question or suggestion, please feel free to write it in the comments section below.

© 2020 ExamsCart.com
%d bloggers like this:
We use cookies to ensure that we give you the best experience on our website. If you continue to use this site we will assume that you are happy with it.Ok