In this post we are providing you with the daily Reasoning Quiz for RRB NTPC and SSC Exams. Attempt Reasoning Quiz For SSC and Railway daily, analyze your score and revise the topics that are refraining you from scoring full marks in this section.

Reasoning section contributes majorly in the SSC Exams especially the Tier 1 exams. Candidates must practice the reasoning section thoroughly to make sure you can not miss scoring high marks in this particular section. So, here we are providing Daily Reasoning Quiz for RRB NTPC and SSC Exams.

Q1. Select the figure that will come next in the following figure series. 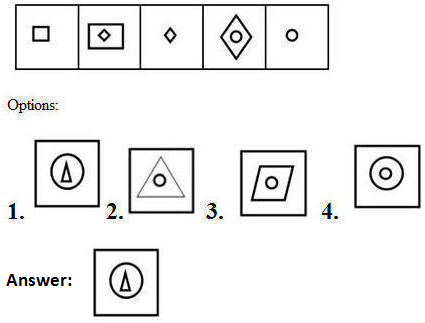 Q5. In a code language, PERMUTATION is written as IBKFRMXMFLG. How will PUBLICSECTOR be written as in that language?

Q6. In a family of 5 members, X is the sister of Y. M has two children and he is the son of E, who is the father-in-law of H. H has only one son. Y is not the grand-daughter of E. How is X related to E?

Q7. Three of the following four words are alike in a certain way and one is different. Pick the odd word out.

Q8. Which number will replace the question mark (?) in the following series?

Some essays are poems.

Some poems are directors.

All directors are singers.

I. Some directors are poems.

II. Some singers are essays.

III. Some singers are poems.

a. Only conclusion I follows.