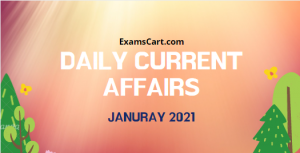 NDB extends $646 million for upgrading highway network, district roads in Andhra Pradesh
The New Development Bank (NDB) has decided to lend $323 million for two projects to be taken up in Andhra Pradesh. The Government of Andhra Pradesh will implement the Projects through the Roads and Buildings Department. The projects are aimed at widening of roads and reconstructing dilapidated bridges.

Madhya Pradesh, Andhra Pradesh become first states to complete One Nation One Ration Card reforms
Madhya Pradesh and Andhra Pradesh have become the first group of states to complete three out of the four citizen-centric reforms stipulated by the Ministry of Finance. The two states have completed the One Nation, One Ration Card Reforms, Ease of Doing Business Reforms and Urban Local Bodies Reforms.

Government to hold spectrum auction on 1 March
The government will conduct auction for radiowaves worth ₹3.92 lakh crore on 1 March, the department of telecommunications (DoT). It will carry out single auction to assign spectrum blocks in the 700MHz (megahertz), 800MHz, 900MHz, 1,800MHz, 2,100MHz, 2,300MHz and 2,500MHz bands.

Cabinet approves signing of MoC between India, Japan on partnership in ‘Specified Skilled Worker’
The Union Cabinet chaired by Prime Minister Narendra Modi has approved the signing of a Memorandum of Cooperation between Indian and Japan on a Basic Framework for Partnership for Proper Operation of the System Pertaining to ‘Specified Skilled Worker’. The Memorandum of Cooperation would set an institutional mechanism for partnership and cooperation between India and Japan on sending and accepting skilled Indian workers, who have qualified the required skill and Japanese language test, to work in fourteen specified sectors in Japan.

Paytm now offers personal loans in 2 minutes
India’s leading digital financial services platform Paytm has introduced Instant Personal Loans on its platform to facilitate access to credit services to the masses. The service can be availed 24X7, round the year even on public holidays and weekends. Paytm is the technology and distribution partner for NBFCs and would help them expand the reach and adoption of loan services to salaried individuals, small business owners and professionals. The loans would be processed and disbursed by NBFCs and banks.

World Bank Released Global Economic Prospects Report
World Bank Released Global Economic Prospects Report according to the report, the Indian economy will contract by 9.6% in 2020-21. The Indian economy will recover by 5.4% in 2021-22. India’s economic contraction will be mainly attributed to the sharp decline in household spending and private investment. According to data from the Indian Economic Monitoring Center, during the covid-19 pandemic, more than 500,000 salaried people lost their jobs.

Chingari partners with Dekko to introduce infotainment on its platform
Indian application Chingari has entered a collaboration with short video news app Dekko to introduce infotainment to its users. With this partnership, the short video-sharing platform aims at introducing a more accessible, sharable, and credible news video content. The partnership with Dekko will give Chingari users access to global breaking and trending news. This tie-up is designed to specifically serve the Hindi speaking consumers across the globe.

KVIC signs MoU with ITBP for supply of 1,72,000 cotton durries every year
Khadi and Village Industries Commission signed MoU with Indo-Tibetan Border Police, ITBP for supply of 1,72,000 cotton durries every year. The total value of these durries is eight crore 74 lakh. The agreement has been signed for one year which will be renewed thereafter. The development comes after Home Minister Amit Shah gave instructions to the paramilitary forces to encourage local products to support the Atma Nirbhar Bharat Abhiyan. The cotton durries will be produced by Khadi artisans in Uttar Pradesh, Haryana and Punjab.

Japan to launch the first wood-based satellite by 2023
Japan’s Sumitomo Forestry company and Kyoto University aims to launch the world’s first wood-based space satellite by 2023 to combat the problem of space junk. According to the European Space Agency (ESA) statistical model, there are more than 130 million pieces of anthropogenic space debris—waste residue due to human activities—smaller than a millimetre around our planet. The debris can travel at a speed of more than 22,300 mph and can impact other satellites.